Lithium battery safety is not rocket science. Manufacturers with a robust set of production data can show customers success rates for their batteries and the conditions that cause batteries to fail. The problem is that very little safety data is accessible to most buyers or the public.

Buyers will always have to decide for themselves how much risk they are willing to tolerate. Some source batteries from a selective group of original equipment manufacturers (OEMs) and pay a premium to avert risks associated with the lowest-priced batteries. But many buyers are operating in the dark, lacking the safety data they would need to make an informed decision.

To safeguard against fire risks, ask lithium battery makers the questions about cell production and testing in this post. Battery buyers don’t have to wait for technology development or new regulations. They can bring about a new safety standard by demanding better safety data and buying lithium batteries only from OEMs that make the data available.

Questions to ask about cell production

Some online shoppers go to commerce platforms like Kickstarter for innovative products and products that may be available at a significant discount from an upstart manufacturer. When sourcing lithium batteries, you want to take the opposite approach. Instead of pursuing innovative products, look for proven products that have a long track record of consistent production. Instead of hunting for discounts from unknown suppliers, expect to pay fair value for a product that has completed a rigorous safety analysis and achieved an exceptionally low failure rate.

How many battery cells and battery packs does your supplier produce each year?

One lithium cell represents one data point. The more cells you produce, the more data you have. As such, the highest-volume producers have the most data on performance, thermal runaway, and failure.

What changes have been made to the battery cell and battery pack production process?

A consistent manufacturing process yields predictable safety and performance results. It’s plain to see that different cell materials bring about different cells. But different production equipment can affect safety characteristics just as much. Even if the materials and equipment stay the same, a manufacturer that relocates production may alter a host of environmental conditions and other variables that affect results. Changes in relative humidity, temperature range, and impurities in the air can impact safety characteristics of lithium cells. Differences in quality control and other processes introduced by a new manufacturing technician crew can also have an effect. All these changes should be understood and quantified in a prudent lithium battery safety analysis.

How does your supplier handle material acceptance and storage?

Even if everything goes right during the manufacturing process, pre-production material acceptance and storage can affect lithium battery safety. About five years ago, a global supplier of solar inverters experienced a series of product failures after electronic circuit boards had been stored in the wrong warehouse and exposed to moisture. Once product assembly was complete and the inverters were energized, a short circuit on the boards caused a fire and led to quite a bit of property damage. While moisture can also affect battery cell safety, so can other environmental conditions, such as air impurities and particulate matter.

It’s not easy to perform a safety analysis that identifies failure points for battery cells. To test how moisture affects safety, you would have to take identical cells and store one of the cell materials in an environment that gets wetter in small increments until you find a statistically relevant number of failures. Then you would have to repeat the process with incremental changes in temperature, dust, and other variables. Testing would require a lot of cells, a lot of minor changes in cell processing, a lot of time, and a lot of analysis. And it would all have to be done without vastly increasing cell production costs.

What are the failure rates for your supplier’s battery cells and battery packs?

In the absence of industry-wide standards, contractors seeking assurances about product safety have their work cut out for them. First, they have to request failure rates and analysis from each of their suppliers. Then the manufacturers must provide the data. Next comes the subjective test. If the contractor feels comfortable with the risk, he or she can decide if the battery quality is adequate. Different contractors have different tolerance levels for quality. A contractor who installs one small system per year may not place a great deal of emphasis on quality. The chances of failure are small. However, contractors installing many large systems must pay more attention to quality. Their businesses depend on the successful operation of a much larger population of cells.

Questions to ask about cell testing

We all know not to leave a fireplace unattended or a gas oven running when nobody’s home. We understand that doing so introduces a serious risk of fire. But how many people know the temperature threshold that is likely to cause a lithium battery to catch fire or explode? Before procuring lithium batteries, especially those that will be sited at a building where people live or work, be sure to understand the conditions that create lithium battery safety hazards. Safety hazards that start in a single battery cell can quickly spread to the battery pack and the entire energy storage system.

What are your supplier’s battery cell thermal runaway characteristics?

It’s important to understand how a battery cell responds to the conditions that can initiate a fire or an explosion. There are many ways to test lithium cells for these conditions. Some examples are the top nail test, where a nail of standard size is driven with standard force into the top of the battery, and the side nail test, where the same procedure is carried out with a battery lying on its side.

What is the probability of thermal runaway for your battery cells?

With test results in hand, you can make reasonable predictions about how a battery will perform according to design specifications. Graph 1 shows how increased temperature leads to thermal runaway. While all five cells exhibit similar power generation as temperature increases, there is a notable difference in how close each cell comes to the failure point represented by the horizontal red line at 160°. 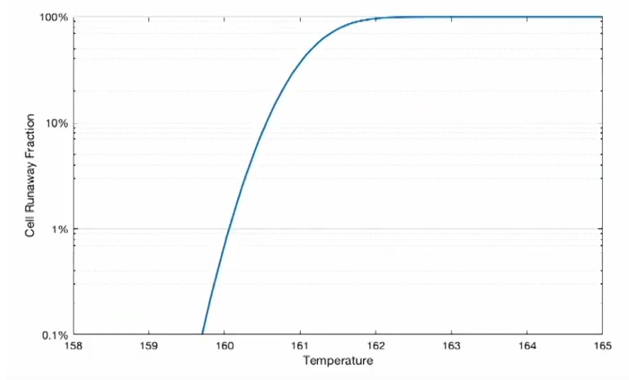 How does thermal runaway spread from cell to cell?

What are the conditions that lead an entire battery pack to catch fire?

If cell-to-cell propagation extends to one or two neighboring cells and stops, failure of the whole battery pack or battery module is unlikely. If cell-to-cell propagation extends to hundreds of neighboring cells, it’s far more likely that the entire pack will burn. By understanding when battery packs catch on fire and start heating up the neighboring packs, the system designer can plan for fire detection and suppression systems as required by NFPA 855 and UL 9540A to kick in as a last line of defense.

What are the conditions that lead an entire energy storage system to catch fire?

If a fire containment system fails to contain a fire within the energy storage system enclosure, the charging infrastructure for the batteries may also catch on fire. (Think of a car catching on fire while being pumped with fuel at the gas station. Fire can spread to the gas pump, then the entire gas station.) Once the charging infrastructure is on fire, the entire property, including its occupants, are at risk. In sum, one battery cell failure can lead to the destruction of an entire building and the loss of life.

A safe battery is a well-documented battery. Test data helps engineers, system integrators, system owners, and regulators make smart, effective business decisions. While data doesn’t eliminate risk, it does inform us of the risk. Therefore, data empowers us to make decisions on how to manage, contain, suppress, mitigate, or ignore it. By putting appropriate measures in place, we can reduce risk to an industry-acceptable level. Without test data, a battery might operate safely today, but we don’t know why. Then if conditions change and the battery is no longer safe, we won’t know how to mitigate the risk.

Contractors should request data from OEMs or look for third-party evaluations from independent engineering (IE) reports or independent test laboratories. The data is not publicly available, or hard to find, which is a serious problem. UL, the “gold standard” in product safety, even has trouble gaining access to this sort of data. So one requirement in the UL 9540 standard is to capture thermal runaway data, even for batteries that pass all the tests. In other words, when a lithium battery goes for the UL 9540 test, the test lab will force the battery into thermal runaway and then document the results to help characterize lithium cell failure.